Trying To Do Our Part - Speaking Up For Ag

Given the climate in the country, and around the world, with regard to agriculture, I feel it is more important than ever to advocate and speak up for our family and other farm families. I'm certainly not an "expert" on any certain agricultural topic. But one area I am an expert in is my family and the decisions we make on our farm and why we make those decisions.  The past two weeks, Bryan and I have both had a great opportunity to tell our story and get the message out about ag.

I am fortunate to be part of an amazing group of women, from Minnesota and many other states across the country, called CommonGround. An initiative through the National Corn Growers and United Soybean board, CommonGround is a group of volunteer farm women who work to bridge the gap between rural/farming families and, primarily urban/suburban women who would most likely be the main food buyers in the home. But we'll talk to anyone! :) We attend events such as women's or farm expos, many of the women blog, and we use social media to try to educate and inform. So this summer, when we got an email asking if anyone was interested in speaking on behalf of the group, I immediately thought, "Public speaking certainly is NOT my thing, but this is important....and there has to be a first time for everything!" I quickly replied I would before I talked myself out of it.


So earlier this month, I made the trek north to Oakdale, a suburb of St. Paul. There was a conference of school lunch professionals from a group of schools around St. Paul and they gave CommonGround  an hour before their food show to speak. Luckily for me, another volunteer, Wanda, volunteered to speak also so we could tag team it. I initially thought, there is no way I could talk for an hour, but in hindsight, I could have shared so much more about our farm and filled up that time! But it was good to have both of us there to share different perspectives. We just do corn and beans and have the cover crop applicator. Wanda and her family do corn and beans, but also raise hogs. So we addressed some hot topics briefly such as GMO's, antibiotic use in meat production and "corporate farming." Even though it was a little intimidating to speak to a group that size for the first time, it wasn't as hard as I feared. Only because I was talking about something I was so comfortable with-our family and our farm. The audience was polite, engaged and interested. We had a table at the food show afterward and everyone through the line was very appreciative, complimentary and said they learned a lot. It was a great first run at a speaking experience and I'm so happy we got to share a little of what agriculture really is to people who have no experience with it!


It was a great learning experience though as one woman remarked when I made a comment about one picture on a slide, that "This is obviously a combine and our tractor and grain cart in the field at harvest." She said "I had no idea what that was! It wasn't obvious to me! You could have told me that combine was anything and I would have believed you!" Good point....something I should keep in mind if I get an opportunity like this again. We all have different viewpoints and perspectives of this world. Mine happens to be from a farm, hers was not. She learned what a combine was and I learned that school lunch professionals and nutritionists have food shows! It was a win-win! I look forward to having an opportunity to do it again in the future if the chance ever arises!

Once I got that one under my belt, Bryan's turn was the following week. Since he has been involved in the Soil Health Partnership, the coordinator asked if he would be willing to sit on a panel at the Sustainable Agriculture Summit in Minneapolis. The panel he was on discussed how we are working to build and improve our soil health. 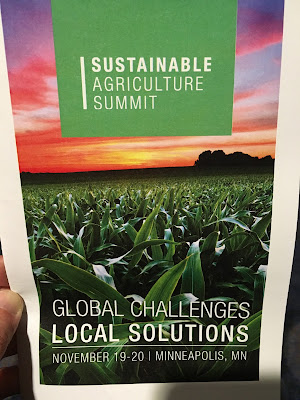 The Summit was put on by Field to Market. The summit brought together all the members of Field to Market and many guest panelists and speakers. The topics all revolved around sustainability - from farmers at the field level all the way up the value chain to CEOs of companies like Land O' Lakes and executives from General Mills. All the speakers and panelists were definitely interesting and gave some thoughts and perspectives that had never crossed my mind before. But I did leave there with some questions...and maybe a few frustrations. 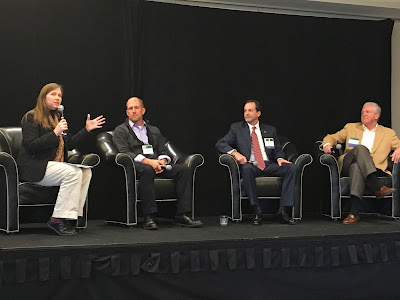 First and foremost, the term sustainable/sustainability was used about, oh.... at least 1000 times! The first thing I picked up is "What is sustainability anyway!?" There were hundreds of people in those rooms and you probably could get a slightly different definition of what sustainability is from each one. It is a very elusive and trendy word right now. Even though the speakers were interesting and offered a new perspective, I was starting to wonder if they have a clear vision of what really is happening out in the country on a typical family farm. These companies, such as Land O' Lakes, General Mills, McDonald's, Walmart, etc, have some lofty goals as it pertains to sustainability...which farmers are a part of and play a part in for them. One company stated they have set a company goal of ZERO waste to achieve their measures of sustainabilty. ZERO....how is that even possible? It's an admirable goal, but is it realistic? We're talking about one of the largest companies in America....zero waste?? And most of these companies said they had set goals to reach, such as reducing their carbon footprint by 28%, but none of them knew how they were going to get there. I found that terribly interesting. Obviously I'm not a high level executive, so maybe that's how the whole gig goes, I don't know.

There was a lot of talk about agriculture and farming, but not as many farmers in the room as I, as a farmer, think there should have been. If someone was asking me what they could do differently for their next summit, I would say they should have an entire panel of farmers - and then some. Large to small. Row crops to produce. Small boutique to larger livestock operations. Given the change in agriculture the past 10 years, I think it's safe to say, we see mountains of change still to come on the horizon. And I wonder after hearing all the topics and speakers....who will be driving that change? Will it come from the bottom up? A collaboration? Or the top down? I don't have the answer, but I fear the latter if we aren't included or don't show up to more of these conversations. 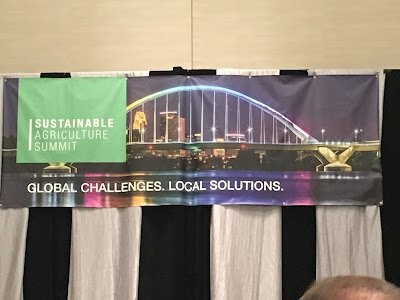 I think even through all the learning and interesting discussions, the biggest take away, that I heard at least two or three times, was how agriculture is doing a poor job of "telling it's story." We heard how people don't trust agriculture. We heard that people trust farmers, but they don't trust farming/agriculture. (Which to me makes no sense at all.) We've moved from 25% of the population farming to 1.5%. We heard a social marketing guru tell us that farmers are very "sexy" right now....but at the same time people, in general, don't trust what they are saying. It's hard to wrap my mind around, to be honest.

I look at some online groups I'm in....the amount of dedication and time these people are putting in to "telling the story of agriculture" is beyond admirable. I like to think I try to do my part, but they are head and shoulders above anything I am doing. They are loud and proud and front and center in my world right now. So I just have to say, how do we get that trust back? How do we make our story heard to the masses? How do we make our story credible and deprogram all the unfounded fears that have been put into consumers minds? Farmers don't specialize in communications and marketing of themselves to the public. And frankly, many don't have the time! If you believe in our country's farmers and what they are doing, we all need to be loud and proud and work hard to dispel all the myths.

These are questions that will be sorted out as the years go along, but right now Bryan and I can keep trying to do our part by participating in these opportunities and getting our story out there. The story about our journey towards what we consider a more sustainable farming operation. The story about how the decisions we make all look toward the future because we want to give our children  something to come back to and carry on if they so choose. 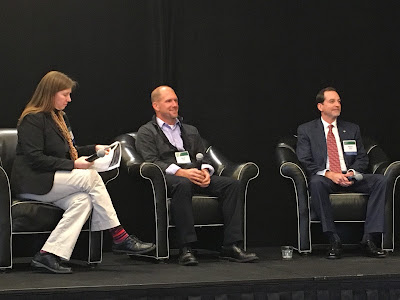