The cool new cat in town

I have one brother and he is 4 years older than me. Lowell is his name to be specific - and I know he will be so annoyed proud I'm writing about him! Needless to say, I wasn't always the preferred playmate growing up. I can only assume he thought I was the annoying little sister. He hopefully knows better now. But, if I wanted to play with someone when the neighbor kids weren't available, I was stuck with lucky enough to have him. Well, I really stunk at those darned Transformers....please tell me I'm not the only one who thought those things were really hard!? And one of my other options was listening to some Guns 'N' Roses or Van Halen while attempting to perfect some serious WWF moves with body pillows on our trampoline. I could do a mean body slam from the top ropes and my pile driver wasn't so bad for a little girl either. I guess I should be thankful he didn't ask to use me instead of the pillows. We had some really coordinated tags in and out to. At least that's how I remember it... So once those things kind of wore off on me, what's a young farm girl to do but turn to cats!

Our yard always had cats and kittens around. Black ones....we had a black mama cat and a big black tom cat we called Killer. He was a tough old bird. But that results in a lot of the same looking black cats. It was always a real thrill when one had a white foot or some white on it's face or chest. Exciting huh? But I also had one cat that was mine that we adopted when I was really young. I named him Cocklebur. When you pulled him off the couch I apparently said it sounded like pulling a cocklebur off your clothes. And it stuck(ha!). We always just called him Bur though. He was the best cat ever. He let me dress him in baby clothes, push him around in baby strollers, he always patiently laid with me when I was sick and never tried to escape. He laid for me a long time when I was in a car accident and broke my arm when I was 4. He was just the best. He was about 20 years old when we finally had to put him to sleep. Sad, sad day. He definitely earned his ticket to kitty heaven.
When our kids were smaller, we had 2 sweet kitties, Gus and Annie, who eventually got old and sick and had to put them both to sleep too. I thank heaven the hubs is better at that stuff than me. I couldn't do it. I cried for 2 days at least with both of them. The thought of getting another animal that needed attention and care didn't appeal to me after Annie, but when auntie Jodi, uncle Greg and cousins got 2 dogs this winter/spring, the kids got on the bandwagon that they needed a pet too. And at 6, 5 and almost 4, they are definitely at a perfect age for a pet.

We have an outside dog and 7 outside kitties right now, like all good farm kids have, but it's not always the same as having an indoor pet - most of the time anyway. I'm not up for doing a puppy at this time though. So a kitty is was. Aubrey has been relentless about this for a couple months and I decided we better do it soon so they would have some time with it this summer before both girls will be in school all day in the fall. So we went to visit some kitties at a foster place yesterday and this one fit the bill. I thought they would like one a little bit younger, fluffier...more kitteny....if that's a word. But this one put on a good show and wasn't scared of the kids at all, so of course she was the top pick. 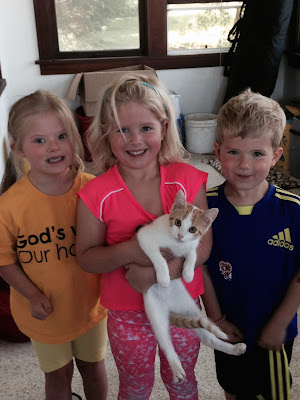 I sent this pics to Bryan yesterday and the he responded with "It looks scared already." Fair statement. And fair assumption given these 3.

So she showed up today after lunch. The name was a decision to make, that's for sure. These past couple months, Aubrey was insistent on either Sparkles or Glitter - of course. But that didn't seem to fit. When we left yesterday she was on a kick of Playful. I said "I didn't name you Goofy, did I? We don't name kitties something that describes them most of the time...pick a name." Finally last night at supper, I suggested she consider a princess name. Ariel was the choice.....so here she is. Ariel. Welcome to the family. I do think the kids are at an age where they can take on some of the responsibility of taking care of her, which I think is great. They can definitely make sure she has food and water. And they can help with cleaning litter...not ready to trust them alone with that task yet.....I mean Wesley did just "wash" his hands in a toilet not that long ago! We'll just play it safe til I feel confident they can do that alone! 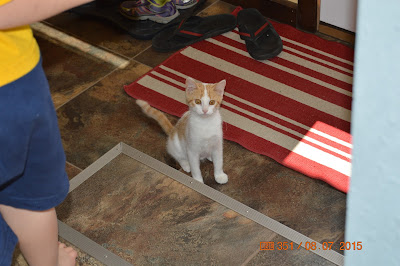 Goes without saying this kitty has not been left alone for a second. And probably won't be for the rest of the week, I would guess. But she will be loved. She is a pretty sweet little thing. Loves to play, already knows where her food, water and litter are. Only hang up is she may not ever get to nap....people won't leave her alone for a second! That's ok though. I just hope the kids enjoy her as much as I enjoyed Bur growing up and they have a wonderful bond and lots of good memories! It looks like it's already started!! I wonder how long before the novelty wears off and they will go outside and play again!! I had to kick them out the door today and it lasted a whole 15 minutes or so! Just another new adventure for our household. I'm interested to see the relationship she has with each of the kids - who she will gravitate too. I'd love to hear some stories about your favorite pet/pets!

Email ThisBlogThis!Share to TwitterShare to FacebookShare to Pinterest
Labels: Family